At the end of every month I take a look at my journal entries and analyse my trading performance. This month my performance was poor. The main reason was that I failed to sell short. I noted in my journal both last week and the week before that selling short was clearly the trade but failed to do so. The funny thing is that I failed this week as well although I did make a few short trades. This month I made a total of 5 shorts having only two of them make money.
Looking at the graphs of the cumulative trades in both December 2009 and January this year, the damage wasn’t that bad thanks to the fact that I lowered my initial targets and sold partially for profit. I look at both months as well because the software doesn’t count trades that initiated the month before nor does it count trades where I still have partial positions.
The trade stats for January show that my R/R was good 3:1 as seen on my largest winner / largest loser. They also show that over trading remains my biggest problem. The average days I let winning trades run remained the same, but I let losers run longer mainly due to the sideways and whipsaw action this month that eventually culminated in selling and taking my stops out.

Now I am nearly all in cash (95%) and keeping trades to an intraday or short time targets. 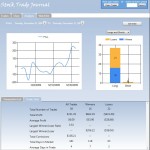 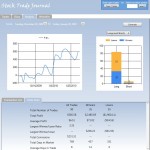 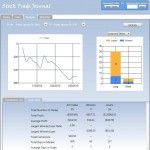 The information in this blog is not investment advice. Please consult a financial advisor before investing. I have been trading stock since the 1990's and survived the .com crash. I am developing software applications to help me trade better and now I am making them available to help other traders. This blog is also a way to share my experiences and observations in the market.
View all posts by Stock Trade Journal →
This entry was posted in General Info, Trade Analysis, Trade Entries, Trade Planning, What to Write in a Journal and tagged journaling, stocks, Trade Analysis, trading, trading journal. Bookmark the permalink.

One Response to Performance Analysis