Interesting month July. There were lots of really good setups that work great, but also many of them failed. And with failed moves come fast moves. I got stopped out of a lot of trades when breakouts failed. But I also was able to capture some great moves. Like IDT, ENTR and PWER. Positions were smaller than usual because I wasn’t sure if the market was going to move higher. I began to look at the S&P 500 E-mini futures for some clues and found that the 60 min chart with the 60 MA provided some insight for market direction.  I still have 8 positions open which are working great. Currently, I still have 1/3  of a full position in ENTR which is up by 42% and a full position in BJGP that is currently up 10%. With so many failures I wouldn’t be surprised if those gains were halved, but the market continues to show a desire to move higher.

As usual, the stats are below for July and cumulative for June-July as well as for all trades since Dec 09 when I began to twitter my trades. From the Setups analysis I can see that breakouts are not really working that well and next month I am going to try to buy the dips on momentum names. Since I continue to make substantially less trades than a few months ago, I am going to increase the risk per trade to $100 starting August.

I also posted a User Gude for the Stock Trade Journal software to explain in a bit more detail how it works. Check it out. 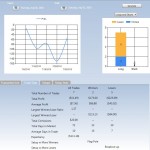 The information in this blog is not investment advice. Please consult a financial advisor before investing. I have been trading stock since the 1990's and survived the .com crash. I am developing software applications to help me trade better and now I am making them available to help other traders. This blog is also a way to share my experiences and observations in the market.
View all posts by Stock Trade Journal →
This entry was posted in General Info, Risk Management, Trade Analysis, Trade Entries, Trade Planning, What to Write in a Journal. Bookmark the permalink.